Android-x86 on SD card with NTFS, Secure Boot and UEFI: 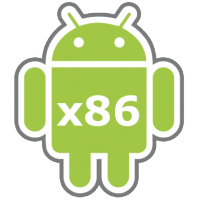 I will show you how to install the 64-bit version of Android-x86 7.1rc2 (and likely other versions such as CM14.1 rc1, or other operating systems based on Android-x86 such as RemixOS), on a SD/microSD card using NTFS as the filesystem (thus providing a fast Android experience) with Secure Boot and UEFI boot.

Most of the tutorials available on the web show how to install Android-x86 on a USB storage device. Even though I was able to find some information about how to install on a microSD card reader, I found no information whatsoever about doing so together with:

Using NTFS as the filesystem for storing Android-x86’s virtual partitions was a priority for me, since I originally tested Android-x86 on a cheap USB stick and observed that the performance/latency difference of EXT4 or FAT32 vs. NTFS was jaw-dropping, with the EXT4 or FAT32 being almost unusable.

So, to summarize, this post will allow you to:

And here are some quick links to the multiple sections:

Before moving on, make sure that:

The computer I have used for my installation was the Dell Latitude 7480, and from what I can gather any Dell E7x40, E7x50, E7x60, E7x70, 7x80 should work the same way, if not many others from Dell. I can’t guarantee that this post will work with your computer even if the above 2 points tick, since it will depend on the manufacturer of the card reader, as well as whether Linux kernel modules are available for it in Android-x86.

I will mention keyboard shortcuts, terminology, screens and show photographs from the Dell Latitude 7480. If you are using a different laptop, you’ll need to find the equivalent items. I will also mention microSD specifically from now on, since that’s the card type this laptop can read.

Get to the BIOS setup tool of the computer (press F2 during the POST screen – right after turning on the computer) and:

The microSD card needs to have either a GPT or a MS-DOS partition table (I have used and tested MS-DOS, but GPT should work as well). 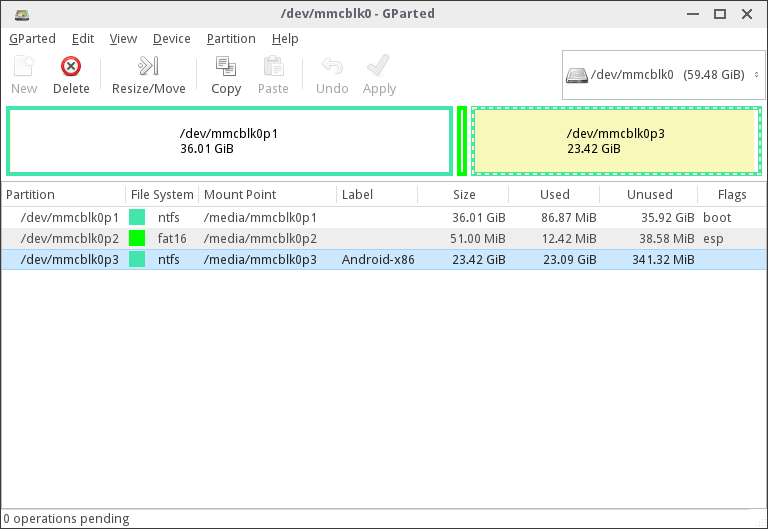 Turn the computer on again, with the Android-x86 installer USB drive plugged-in, and press the F10 key to launch the one-time boot menu. Choose the USB device.

The Android-x86 GRUB menu will show up, choose the third option:

When you are faced with the list of devices/partitions where you can install Android-x86, you might notice that the partitions of your microSD card are missing (they are in the Dell Latitude 7480). This depends on the manufacturer of the microSD card reader but my expectation is that they will be missing more often than not. In order to make the partitions show up on the list, the correct kernel module for the card reader needs to be loaded. For the Dell Latitude 7480 the module name is rtsx_pci_sdmmc, but it may be different in other computers. One way to find the name of the module is to launch another Linux-based OS such as Ubuntu or Parted Magic and running the following commands to inspect their output and obtain the name of the module:

Or by finding out the module driving /dev/mmcblk0p1, for example. You can check here for more information at [1]

Once you know the module name, in my case rtsx_pci_sdmmc, just boot the Android-x86 usb drive again and, once on the list of partitions, press Ctrl+Alt+F2 to switch to tty2 and run the following command (modify accordingly):

Then press Ctrl+Alt+F1 to go back to tty1 (where the list of partitions is), and select “Detect devices”. Hopefully, the 2/3 partitions of your microSD card will now show up and will probably be called mmcblk0p1 and mmcblk0p2 and mmcblk0p3. The numbers will reflect the order of the partitions you created earlier (first to last), and the filesystem type will also give you another indication as to which partition is which.

Choose the microSD card NTFS partition as the destination of the Android-x86 installation. 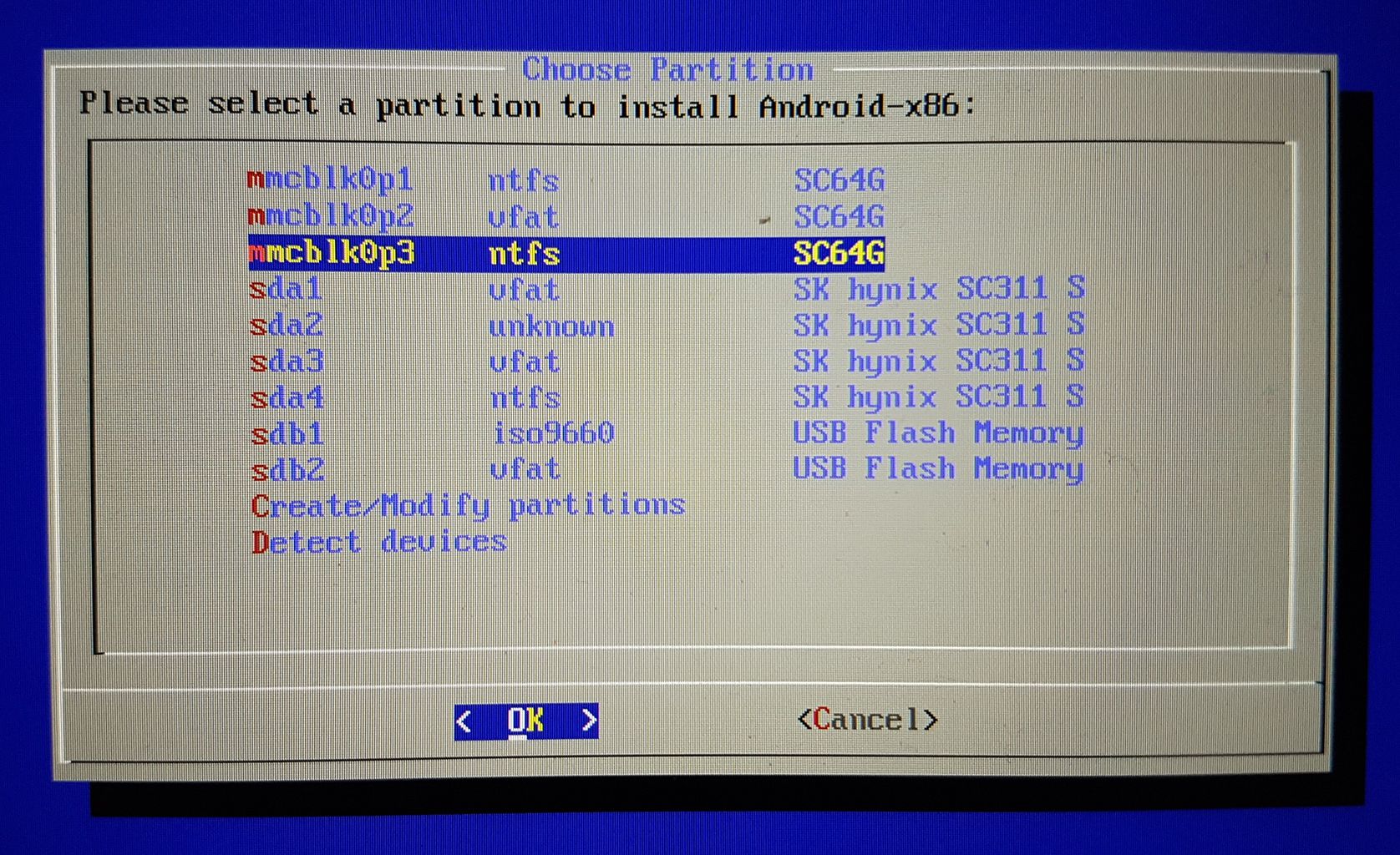 When asked if you want to install EFI GRUB, say yes.

When asked if you want to make the /system partition read+write, say yes.

Then wait from a few minutes to more than an hour, depending on the /data size and the microSD card speed.

At this point, Android-x86 is already installed on the microSD card. However, the USB installation drive/media will be used one more time in the next section, so keep it around.

To make Android boot there are 2 important issues that need to be corrected (might be only 1 in some cases):

At this point, go back to your Linux installation or Linux live image.

There, 3 things have to be done with regards to the partitions and files from Android-x86:

The next section will go through all of this.

Get the necessary kernel modules

To get the necessary kernel modules for booting Android-x86 (only rtsx_pci_sdmmc and its dependency rtsx_pci in my scenario – you should look for the dependencies of the modules you need using the lsmod command). The Android-x86 live squashfs image should first be extracted so that you can access its files. So plug in the live USB drive and mount it in your Linux system. Then follow the following steps:

You now know where the needed modules are, so let’s temporarily switch to something else: getting the original initrd image in order to later update it with the additional modules.

The initrd image is now extracted, so you can modify it as needed. In terms of the microSD card reader kernel module, the 2 modules above will be copied to initrd and will be loaded by changing one of the scripts (the same one that issues the Detecting Android-x86 message).

Inside the init file, look for the following:

Before that (should be around line 135), add the following:

What these lines do is to simply load the modules manually, from where we copied them to (although from the perspective of the initial ramdisk already running, so don’t doubt that the paths are correct in the lines above).

Change the message in the “echo” line however you want, or remove it.

Now that the initrd image is finally ready, it’s time to turn it back into a single file.

And copy that file, along with the ramdisk and kernel files that are in the NTFS partition, into the FAT16 partition. This will make GRUB find the files even if Secure Boot is disabled or the NTFS GRUB module is not present.

With a fixed initrd.img together with a new location for it and its relatives, GRUB should now be able to boot the initial ramdisk  which should be able to automatically detected Android-x86 on the microSD card, since any missing kernel modules will now be loaded.